Unfortunately, in the context of European legislation regarding health claims, we are not allowed to disclose to consumers where Amitabha can be applied.
We can talk to you about this by telephone. If you are interested in the application of this product, please contact us: tel: 023 5767892. We are happy to assist you!

An amazing trio of mushroom extracts consisting of: Ganoderma Lucidum (Reishi), lnonotus Obliquus (Chaga) “Black Gold” and Poria Cocos “Fu Ling”, one of the most valuable recipes in the TCM arsenal. 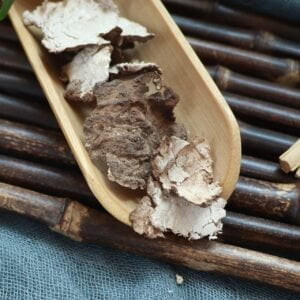 Poria Cocos is an edible fungus known in Chinese as “Fuling” and has been used in traditional Chinese herbalism for over 2000 years. A “Poria Cocos Polysaccharide Oral Solution” has been developed and sold since 1970 as an over-the-counter dietary supplement. In 2015, “Polysaccharidum of Poria Cocos drink” was approved by the Chinese Food and Drug Administration.

Another super mushroom in our trio is lnonotus obliquus, also known as "chagaconsidered the “gift of God” or the “king of herbs” in China, where its use within TCM dates back thousands of years. The locals in the mountainous region of Siberia drank Chaga tea daily, inhaled Chaga and used it topically on the skin. Over time, Chaga's popularity spread to the West of the Urai Mountains and the Baltic regions.

Chaga – lnonotus Obliquus is also one of the most antioxidant-rich, nutrient-dense mushroom on the planet with an ORAC score of 365,570!

Other Names: Reishi Mushroom, Red Reishi, Ling Zhi mushroom, Mushroom of Inmortality, Varnish Conck, Phantom Mushroom, Ten Thousand Year Mushroom (English), Glänzender Lackporling (German), Ganoderme luisant (French)
Reishi is a mushroom that belongs to the ganodermataceae family. In China, the mushroom has been used for more than 4000 years for its properties. In nature, it grows at the base and stumps of deciduous trees, especially those of the maple tree
Important active substances in Reishi include polysaccharides such as beta-glucans. In addition, Reishi contains many other interesting substances including: vitamin B2, vitamin C, triterpenes and adenosine.

Important active substances in Reishi include polysaccharides such as beta-glucans. In addition, Reishi contains many other interesting substances including: vitamin B2, vitamin C, triterpenes and adenosine. beta-d-glucans, Triterpene, antioxidants, calcium, magnesium, potassium, ergosterol

Mushrooms are good to use to support the immune system or as a therapy for chronic complaints, but then you must know the correct dose that you will receive from a mycotherapist.
With too low a dose or not the right combination of mushrooms, it cannot do what you expect it to do.
Therefore, always contact a mycotherepeet for the best advice in the dose.

1 to 3 capsules daily before meals unless otherwise advised.

Do not take if you are allergic to mushrooms

All Terracotta products are made from organic extracts of TCM quality, do not contain gluten, soy, wheat, lactose, sugar, salt, preservatives and artificial colors.

Find a point of sale

Find a point of sale

Terracotta products are natural food supplements. A varied, balanced diet and a healthy lifestyle are important. A nutritional supplement is no substitute for a varied diet.

We use cookies on our website to give you the most relevant experience by remembering your preferences and repeat visits. You can adjust your cookie settings by clicking on the link below or by clicking "Accept" and giving your consent to the use of ALL cookies on this site.
Cookie settingsCookie policyWEIGERACCEPT

This website uses cookies to improve your experience as you navigate the website. Out of these cookies, the cookies that are categorized as necessary are stored on your browser as they are essential for the basic functionalities of the website to work. We also use third-party cookies that help us analyze and understand how you use this website. These cookies are only stored in your browser with your consent. You also have the option to opt out of these cookies. But disabling some of these cookies may affect your browsing experience.
Necessary Always Enabled
Necessary cookies are absolutely essential for the website to function properly. These cookies ensure basic functionalities and security features of the website, anonymously.
Functional
Functional cookies help to perform certain functionalities like sharing the content of the website on social media platforms, collect feedbacks, and other third-party features.
Performance
Performance cookies are used to understand and analyze the key performance indexes of the website which helps in delivering a better user experience for the visitors.
Analytics
Analytical cookies are used to understand how visitors interact with the website. These cookies help provide information on metrics the number of visitors, bounce rate, traffic source, etc.
Advertisement
Advertisement cookies are used to provide visitors with relevant ads and marketing campaigns. These cookies track visitors across websites and collect information to provide customized ads.
Others
Other uncategorized cookies are those that are being analyzed and have not been classified into a category as yet.
SAVE & ACCEPT
View Cart Checkout Continue Shopping
X
Scroll To Top